“This is what it is to be a Christian: to know somehow that Christ is risen. The “how” does not matter, nor the specific “when.” It is simply grasping the basic truth of this day: that God, not death, has the final word, and God’s word is a resounding ‘Yes!’” (Seasons of the Spirit) 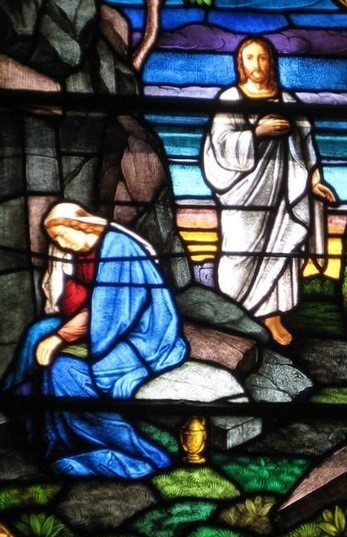 The bible gives us exactly zero details of what happened in Jesus’ tomb. Nothing! Zilch! There is not even in the Christian tradition, that I’m aware of, a myth or legend about it. That is because that’s not where the truth of Resurrection lies. The Resurrection accounts revolve around two details – firstly, the tomb was found empty on the Easter morning. In Matthew, Mark and Luke a messenger (an Angel in Matthew) gives a message that Jesus has risen. But the main response of the disciples to this is confusion and non-understanding. The second detail is that the disciples had encounters with the risen Jesus as individuals, in small groups (like the two Mary’s in today’s Gospel), or in larger groups. And these encounters significantly transformed them.

For Jesus’ disciples the resurrection wasn’t just a nice personal comfort that Jesus’ spirit was with God. It was a total transformative turnaround in the whole group of believers. The transformative experiences of Jesus as risen (at Easter) and the Holy Spirit at Pentecost (fifty days later) were the two most crucial things that fired the early church to spread the good news that Jesus was Lord, that death was not the end, that forgiveness of sins and eternal life had been given in Christ, and that all could be welcomed into his kingdom. Suddenly Jesus’ followers, who, to be honest, had not shown a whole lot of potential whilst he was alive, became courageous and indefatigable bearers of good news to the known world.

At the beginning of Holy week on Palm Sunday we considered the many journeys that Holy Week encapsulates and the many mindsets of the people in the crowd as they watched Jesus enter Jerusalem on a donkey. We joined with the crowds to say “Hosanna, save us” realizing that we came to this holy week from many different life experiences. On Maundy Thursday we considered the example of service that Jesus gave at the last supper in washing his disciples feet, and sang “ubi caritas et armor deus ibi est” – “where there is charity and love, there is God”.

We recalled the last supper when Jesus shared the bread and the wine as a way to remember him, not in a nostalgic way, but as a way to celebrate his very presence with us as his body in the world. On Good Friday we entered into the darkness and pain of the cross, and reflected on Jesus’ acceptance of the cross, when he really wanted a way out of it. In the Gethsemane prayer of Jesus – (let this cup pass from me, but if it cannot pass, your will be done) – Jesus models a spiritual path of acceptance and trust in God even through the desolation and apparent abandonment on the cross.

Then today we hear of the fragile beginnings of resurrection news. Two faithful women, running from the tomb, in fear and great joy with news from an Angel that Jesus had risen. And then they encounter Jesus, who says  – “do not be afraid ; tell the brothers to go to Galilee and there they will see me.” Well they did go to Galilee, and they kept going, they went to the whole world, and still the good news continues.

For two thousand years the church has lived and proclaimed a faith in the Risen Christ, the one who is still wounded, yet transformed, who met his disciples and sent the Holy Spirit to empower them. Over that time:

The Easter story and faith in the resurrection has continued on. St Paul reminds us that Faith, Hope and love endure.

Resurrection faith may not be easy to grasp. The cross was real, the pain and death was real, and the good news of the risen Christ can be hard to fathom. But the transformation of God’s kingdom is insistent. It takes root and grows in us and around us. Faith may seem to be beaten down at times but never extinguished fully. Faith endures, and paradoxically, often most strongly in the places where it is challenged most harshly by the crosses of the world.

The Resurrection of Jesus is the sole event that brought us here, across a couple millennia, to church this morning for worship. We are reminded that as former Archbishop of Canterbury Michael Ramsey famously said: “No resurrection! No Christianity.” With no resurrection there would be no churches, no Easter eggs, no long weekend, no gospel and no glimpse of heaven.

The resurrection of Christ always stands as a monumental mystery of the faith, but its reverberating impact is still being felt. As Desmond Tutu profoundly wrote:

Goodness is stronger than evil;

love is stronger than hate;

light is stronger than darkness;

life is stronger than death;

victory is ours, through Christ who loves us.

He is risen indeed!