Ministry/Staff Team of the Anglican Parish of Glenelg – 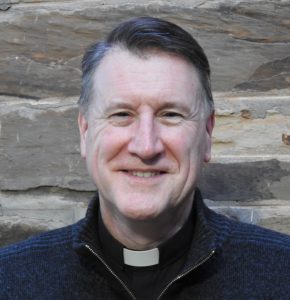 Andrew was born in Port Lincoln but moved to Adelaide whilst young and attended Mitcham primary school and Unley high school. After a year at Salisbury Teachers College he transferred to the SA Institute of Technology where he completed a Civil Technicians Certificate and worked for a few years as an engineering draftsperson. Involvement at St Columba’s Hawthorn in youth ministry and other roles led him to seek selection for ordination he commenced studies in 1988. He graduated 1994 from St Barnabas College and Flinders University with BTh (Hons). Assistant roles at St Peter’s Cathedral, St Martin’s Campbelltown and St John’s Norton Summit then led to his appointment at St Chad’s, Fullarton where he served from 1997 – 2007. Whilst there he completed a Graduate Certificate in Grief, Loss and Trauma Counselling. New Commonwealth Government support for school chaplaincy then led Andrew to work in junior school chaplaincy at St John’s Grammar, Pulteney Grammar and St Peter’s Woodlands Grammar school. By 2011 Andrew was working as both chaplain at SPW and serving as senior chaplain for Anglican Schools in the Diocese. He was appointed as Parish Priest of Glenelg at the end of 2015, a role that includes assisting with chaplaincy in the school. He also serves the diocese as Archdeacon of Torrens. Interests include reading, playing guitar and piano, composing, writing, golf and time with family. He is married to Jo and they have two daughters, Rebecca and Lara.

Michele joined the Anglican Parish of Glenelg at the beginning of 2016 as an Assistant Administration Support Officer while studying a Bachelor of Theology at St Barnabas College. She was ordained a deacon at the end of 2016 and served at Glenelg in this capacity for two years before being ordained priest at the end of 2018. Michele’s ministry as assistant priest in the Parish includes being the co-chaplain at St Peter’s Woodlands Grammar School, leading youth group for middle school to high school aged young people, leading bible studies, singing in the JAM band, maintaining the parish website and Facebook page and participating in the OASIS women’s group. Michele is also involved in presiding and preaching at various services across the parish and also conducts Baptisms, Weddings and Funerals upon request. Prior to her ordination, Michele worked in hospitality management and information technology across education, defence, banking and finance, technology outsourcing, state government sectors in many varied roles. Michele holds a Masters in Business Administration from the University of South Australia and continues her studies in Theology at St Barnabas College Adelaide.

Margaret joined the Anglican Parish of Glenelg, in July 2019 and plays an active role in the pastoral care ministry of the Parish. As well as taking part in all areas of ministry she has a particular focus on those in residential care. Margaret worked in the area of community Palliative Care with staff at the Victor Harbor Hospital and Daw House at Repatriation Hospital, before its closure. Following 45 years as a registered nurse Margaret was ordained in 2015. Since then she has worked as Chaplain at Anglicare Grange, has experienced parish ministry at St Michael’s Mitcham and St Elizabeth’s Warradale and relieved clergy for annual leave at St Richard’s Lockley’s, St Luke’s Whitmore square, St Mary’s South Road and St Philips Somerton Park. As well as being part of the Glenelg clergy team, Margaret continues her interest in life-long education for lay people and clergy at St Barnabas College as an adjunct lecturer in the undergraduate and the degree programme in theology.

Hewina Jackson, Administration Officer and CVS Coordinator
Hewina joined the Parish January 2020 and had the steep learning curve of learning , and supporting the parish and clergy during the pandemic. Hewina is responsible for the daily operations of the parish and is the Community Visitors Scheme (CVS) Coordinator for the Glenelg area too.