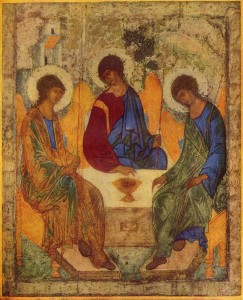 When is the last time that so many people around the world were discussing a sermon! I can’t believe how many times Archbishop Michael Curry’s sermon (From Prince Harry and Meghan Markle’s Wedding) has come up in conversation and on the media this week. Even on Talking Footy, Brian Taylor dedicated his entire ‘Blowtorch’ segment to attacking the sermon, causing Wayne Carey to come to the preacher’s defense and claim that he really liked the sermon! Who’d of thought we would ever a debate about the merits of a church sermon on an Australian footy show!!

I am really struggling to think of a sermon that has had such a public impact – I immediately think of speeches like Earl Spencer’s eulogy at Diana’s wedding; Mandela’s inauguration speech;  Martin Luther King’s “I have a dream” speech; the Billy Graham rallies here in the fifties – all powerful sermonesque speeches that had a lasting impact on the people who heard them. But a church sermon?…

Well for a little while at least, people in everyday conversation are talking about God and love – all thanks to Archbishop Michael Curry. Who, by the way, even though many think was an obscure preacher, is actually the presiding Archbishop of the Episcopal church of the United States of America, just as Justin Welby is the presiding archbishop of the Church of England. (so it was entirely appropriate that a cross-Atlantic state wedding would involve them both).

I want to quote a little of Curry’s sermon because it’s so relevant to Trinity Sunday. If you want the full copy, and have somehow been living under a rock and managed not to have heard it, there are copies at the back (or you can watch it on youtube).

There is something right about it. And there’s a reason for it. The reason has to do with the source. We were made by a power of love, and our lives were meant – and are meant – to be lived in that love. That’s why we are here.

There’s an old medieval poem that says, “Where true love is found, God himself is there.”

Back in 2016 the NCLS (National Church Life Survey) asked us where God ranked in importance in our lives? And from about 150 responses, 29% said God is the most important reality in my life and 37% said God was more important that almost anything else. So for two thirds of us God is right up there in importance. I would imagine that those who said God was more important than almost anything else, probably were thinking their partner or children, the people we love, were the most important. But here’s the thing – we don’t have to choose between God and love! Remember St John wrote – God is love and those who live in love live in God and God lives in them. And, as archbishop Curry quoted in his sermon: ubi caritas et amor deus ibi est. Where charity and love is, there is God. That’s not just a nice greeting card thought. It’s a pillar of Christian belief and experience.

Our NCLS asked us what we most value about our worship? No surprises that the highest ranked response with 61% was sharing in Holy Communion. And when it asked: What should we most focus on as a church? The highest response, with 40%, was ‘building a sense of community’.

All this leads beautifully into this most special of Sundays – Trinity Sunday – and our theme God in Community, God in relationship.

God is the invisible string between us*.

God is present in every moment of compassion, love and care that we experience – for God is love.

Sharing holy communion tangibly unites us to God and one another, it captures in the physical elements of bread and wine the intangible foundation of a faith that says we are all in communion with each other – bound together in love. We want a church that has a strong sense of community because that is where God is found, in relationship, in true community, in caring for each other and praying alongside each other.

It’s sad that some Christian leaders feel daunted about preaching on the Trinity Sunday because this uniquely Christian experience of the divine has so much to say to a world that needs true connection, real relationship, deep community and love.

As I drove up ANZAC highway this week, in the middle of a cold day, I saw a young man, in shorts, no shoes, smoking, drinking from a bottle of wine and staggering up the footpath. I make no judgment on him personally but it just seemed such a sad image. So symbolic, that as the many cars rushed past him, there was someone who seemed so vulnerable and alone and escaping into intoxication.

I hope people keep on talking about God and love a little bit longer. I know they won’t. I know another headline will come along and today’s news of a sermon will become tomorrow’s recycling. But regardless of the media frenzy, the eternal movement of the Trinity will always continue sweeping all around us, drawing us in, inviting us to the divine table (like Andrei Rublev’s famous icon so beautifully shows) bringing us into the mystery of communion with God and with one another.

That is our Trinitarian faith. Praise God.